It all began with setting the task of dimming lighting in a smart house system. It so happened that with this task on the controller Beckhoff CX9020 dealt for the first time, so not everything turned out easily and simply.
Initially, as soon as the corresponding devices were connected to the bus, the controller software KS2000 did not see the DALI modules, there was no communication. The reasons for this phenomenon could only be guessed. On the forums it was written that Arlight products are substandard and has many complaints. Read that working is 1 for 10 dimmers. As an engineer, who was assigned to deal with such a task, it is wrong to rely only on one opinion. Accordingly, if there is a task and the solution does not go, then it is necessary to divide this task into parts, solving each of the parts in turn and consistently. It should be noted that I already studied at Beckhoff and WAGO RUS, in which I was given the necessary knowledge to connect devices on the DALI bus, but it should be understood that without practical application, experience in years turns into residual and extremely superficial knowledge. Accordingly, if you do not have a connection between the devices, you first need to understand the theory of the data transfer process and understand what the network is composed of, what network components are present and how the information is transmitted over the wires. It is also important to understand who is the initiator of sending telegrams, and who is the recipient, what methods of issuing telegrams are present and can be applied.

In order to ensure that the experience with the network setup was successful and there was some guarantee of obtaining results, I asked WAGO RUS to stand for the connection of the DALI bus devices. The policy of the company in WAGO RUS is quite friendly with respect to its potential integrators and, accordingly, I was not denied the stand, on the contrary, they helped with the selection of the necessary equipment.

The stand in such structure has turned out:

Started with an average check, namely the DIMI dimmer bus. I needed a USB-DALI adapter from Tridonic. I agreed with Eremin Dmitry company “Tehliving” about the consulting help. This adapter was in their possession and so I had no choice but to bring all the equipment I had (Arlight dimmers) for testing the working capacity. Many thanks to colleagues that they extended a helping hand.

In the process of verification it became clear that when setting up such systems and devices there are unspoken rules that must be strictly observed, namely:
1. Diode tapes should be connected to devices (I neglected this in the beginning);
2. The DALI Wizard must be configured and issued specific packages so that slave devices can see that the bus master is present;
3. The DALI bus should be powered by a constant voltage of at least 15 or 17 volts.

Dmitry presented to me for my further experiments the dimming switch Osram. This is such a box in the form of an ordinary light switch, with a rotating core. This device is necessary so that I can turn on and off all slave devices on the bus at the expense of sending broadcast packets. A very useful thing, it helps when setting up to solve all the problems with the power of the bus and allows you to quickly turn everything off. It helped a lot when I realized that the tapes were incredibly hot at 100% power. And in the future this helped a lot, because I could configure the bus with devices regardless of whether the controller is working or not. Could at any time completely turn it off and turn on the lighting with this switch-torsion.
After I was convinced that Arlight dimming drivers work and are able to control LED strips on their own, it’s time to do a re-controller software. I started with the WAGO controller.

WAGO is configured as follows:
• Check if there is 16 volts on the bus and if all devices are connected according to the instruction manual.
• Download on the Internet WAGO DALI Configurator
• Open DALI Configurator through Wago IO Check
• Find and press the network initialization item and arrange the device addresses in random order
• If we see that the connected devices are detected, then sending the commands to the inclusion can see what really happened in our reality. Accordingly, we write down which luminary belongs to which address, with reference to the geometry of the room.
• I had a ready-made example of Codesys, issued by WAGO. Accordingly, I had to tie it to the existing controller and make it work with existing DALI addresses of the devices.

Beckhoff is configured as follows:

• We connect according to the manufacturer’s scheme in accordance with the instruction manual
• Check the voltage on the DALI bus, it should be 15-17 Volts
• Run the KS2000 program. Then we connect to the controller in accordance with the instruction manual and the description of the connection to the DALI bus. It should be taken into account that the leadership was compiled long ago and there are some inaccuracies. I was greatly confused by the red indicator of the module in the KS2000, which symbolizes the error on the bus. If it does not burn on the physical module itself, do not pay attention to it.
• We go to the random addressing section and start a search, which should show how many addresses there are on the bus.
• On the main tab, start the program to initialize the found devices.
• The program should show the presence of devices and give them temporary names
• By alternately issuing commands incremented jobs to the address of the dimming drivers, we control the devices. 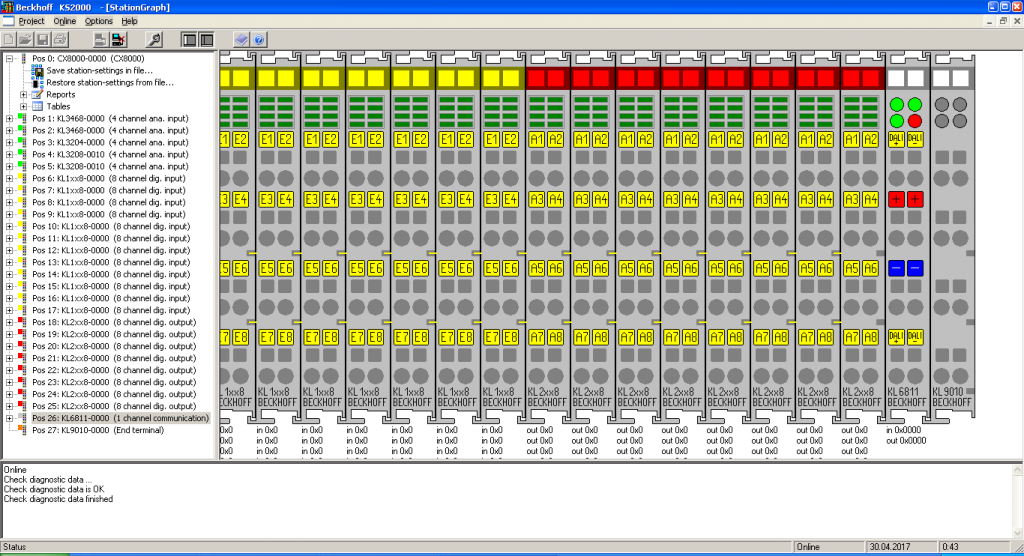 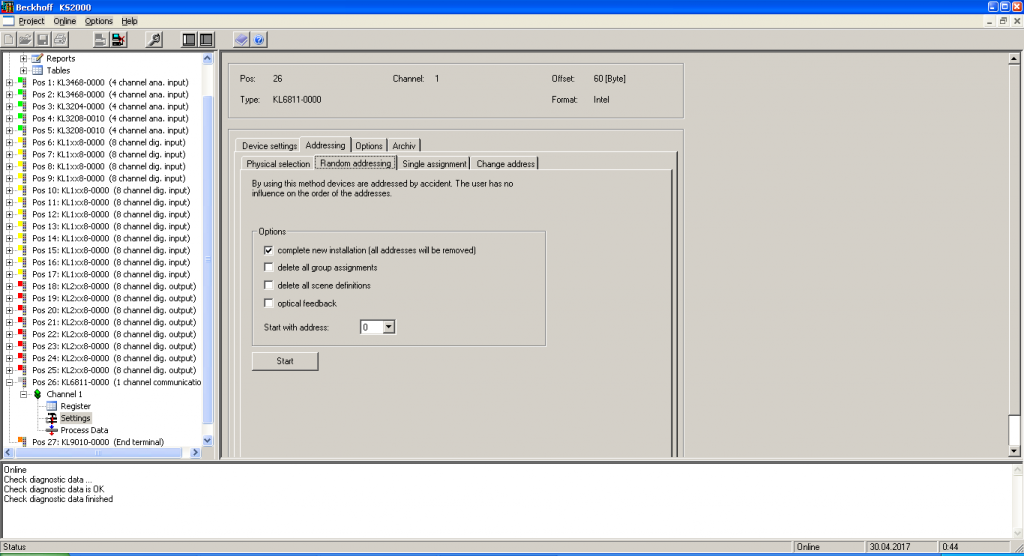 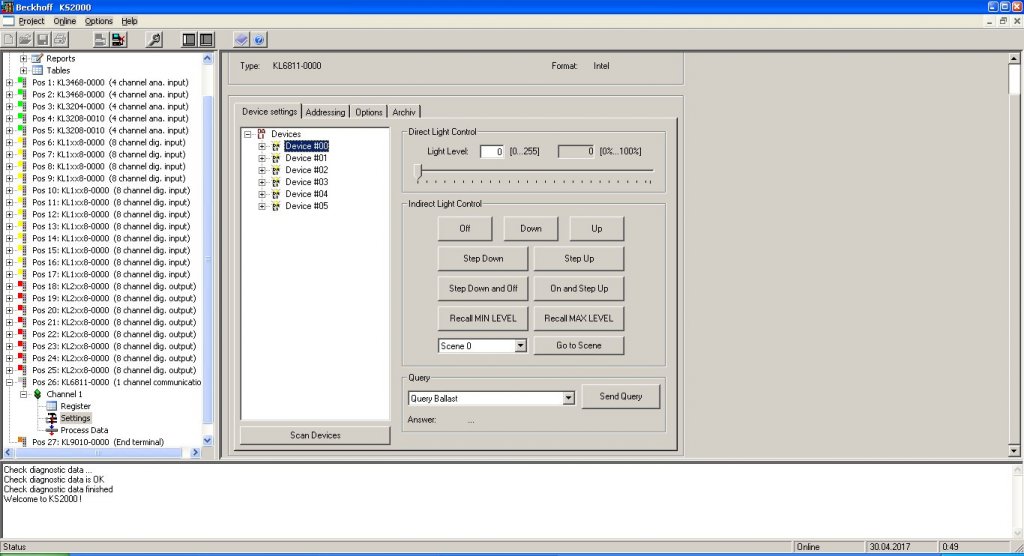 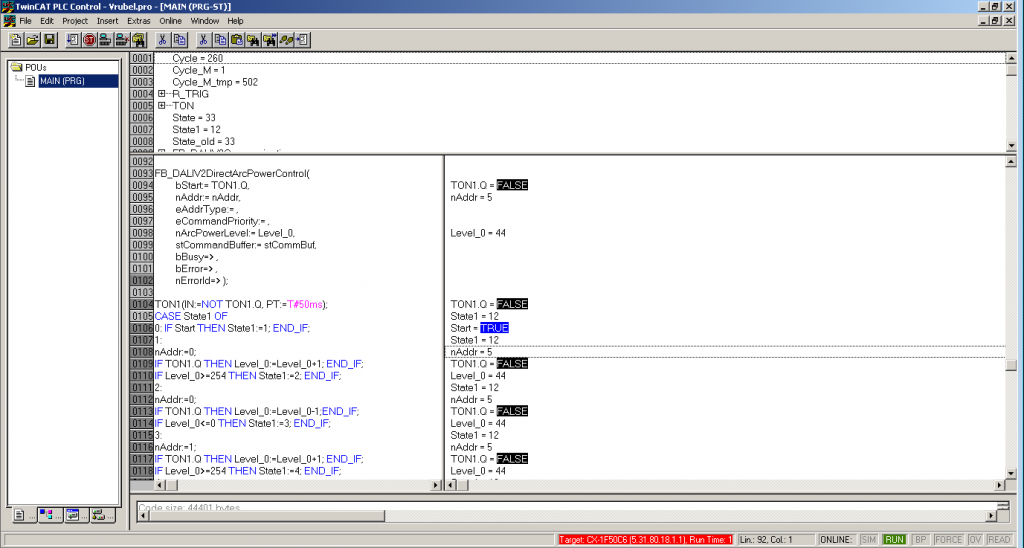 Thus, we see slight differences in the settings of equipment from different manufacturers. However, in my personal opinion, the adjustment of the WAGO controller is still somewhat simpler than the BECKHOFF controller, since there are more materials posted on the network and these materials are more friendly for the Russian-speaking audience.
There are no special complaints about Arlight drivers (dimmers), everything works fine, despite the small mistakes made in the instructions. I admit that these are subtleties of translation. The only, but quite palpable minus I would call some barely noticeable squeak, which becomes audible when the overall noise background (at night) decreases. I believe that when operating a smart house, it is possible to run the circuits into a gap through additional starters that cut off the total voltage from the entire lighting circuit. Then there will be nothing to squeak. The specified device addresses are retained after power restoration.
Recommendation: do not forget that all LED strips are heated, therefore, it is necessary to use a heat sink aluminum profile. Otherwise, there is a possibility that such lighting will not last long