I will try to explain in simple words the practical essence of rather complex regulatory processes. 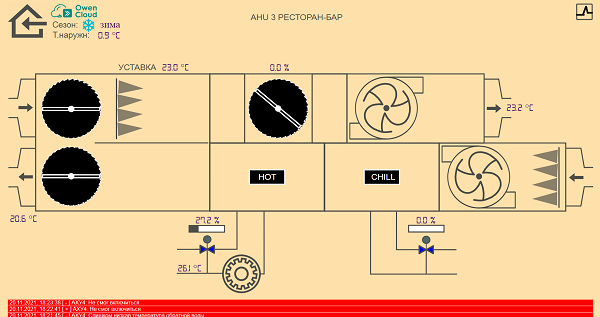 If you are waiting for an article from a specialist who knows TAC, then you must disappoint, since TAC (Theory of Automatic Control) has not been studied. I draw conclusions based on practical experience in implementing various installations and setting up circuits.

This system has a temperature sensor for supplying air to the room, a pump, a control valve on the return water pipe, and a return water temperature sensor. When the valve is opened, water quickly passes through the radiator, the air takes heat from the radiator and the coolant returns to the return water temperature sensor. Setting up the system is complicated by the fact that it consists of two closed circuits, swinging at different frequencies. The first circuit is the supply air circuit and is slow and inert. The second circuit is a return water circuit, less inert, but with its own character. The second circuit is quite fast, requiring a timely response. Both circuits (water and air) need independent adjustment and stabilization, which is confirmed by a real example.

Air passes through the radiator, and a sensor is placed at the outlet of the ventilation system, which records the temperature of the supply air. In theory, in the simplest cases, one PID loop should be enough, capable of commanding the valve in accordance with the mismatch between the setpoint and the air supply temperature. However, you need to understand that two circuits can swing with different amplitudes and at different frequencies, respectively, to stabilize the system as a whole, it is better to break the task into parts and stabilize each of them independently of each other. It is advisable to create two PID circuits, one slow, the second fast, arranging them in a cascade.
The PID algorithm includes three main coefficients:

“P” is the “pedal” coefficient, the speed / magnitude of the device response to the calculated delta / mismatch depends on it. Too small value - will not be enough and the process will be underregulated. Too large value - waves are likely and, as a result, overshoot and buildup.
“I” is the coefficient on which the predicted impact on the circuit depends. Sometimes I put quite large numbers, about 160, which adds inertia to the contour. In this case, the valve begins to react to the current process with some advance. It is necessary to add carefully, a little bit, with an analysis of what is happening on the chart.
“D” is the coefficient of damping of residual oscillations. Usually a very small value is set or not set at all, as it can interfere.

Each circuit is configured differently. The circuit that is designed to control the supply air temperature is made very slow and inert with a large degree of foresight. The circuit that regulates the temperature of the water after the radiator is made quite fast also with a predictive element. It turns out a cascade control scheme with a slow main and fast slave control loop.

Important: in the main circuit, it is necessary to set the minimum and maximum limits from 18C to 45C. Too cold water is not required, especially since there is a radiator protection for the return water temperature and it is advisable not to approach it. The upper threshold is also important, since the greater the difference from minimum to maximum, the more difficult it will be to balance the operation of the circuit.

For the slave circuit, we also set the minimum and maximum valve positions.

Bottom - programmatically adjustable value. If the return water temperature approaches the threshold value, it is necessary to try to slightly open the valve in advance, preventing the protection from tripping.

This is how it works with a control loop with one PID. It was impossible to tune the system completely without hesitation with one PID controller. The surge that is on the left in the graph is the fixation of the operation of the freezing protection. 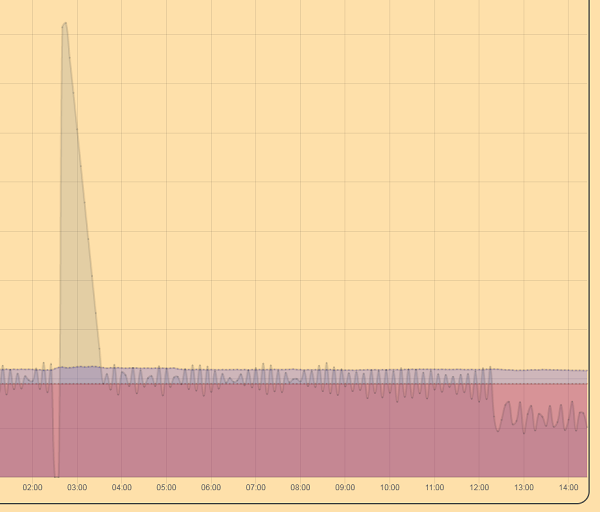 So it began to work after the introduction of the second PID FB. Self-oscillations on the slave circuit are still visible, but in this case I preferred to stop tuning, as I believe that a quick response is important (graph from Owencloud). 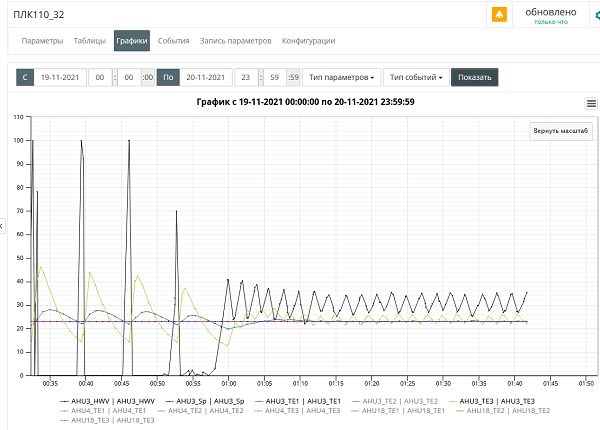 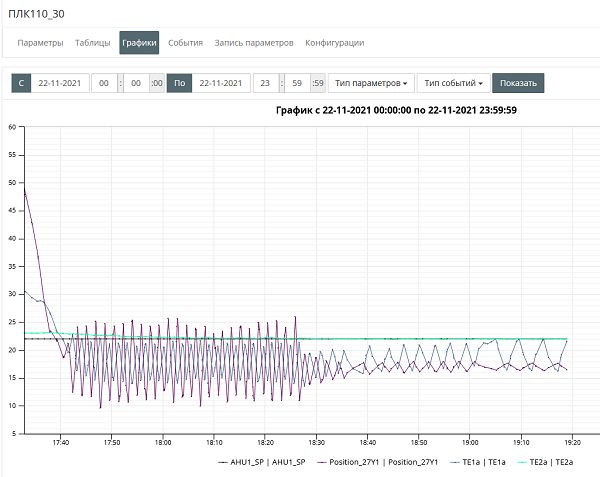 Increased D, decreased P, it became even a little more stable. The return water temperature circuit is quite capricious.

A natural question arises - can these PID controllers conflict with each other during operation, because in fact there is only one common device?

There is a possibility of some conflicts if the regulators are not adjusted. If set up relatively correctly, the regulators begin to work well as one common element. One asks for a certain water temperature, and the second one works directly with the valve and prepares the desired water temperature for the previous one. It looks like a team work.
What coefficients are set for the supply air regulator 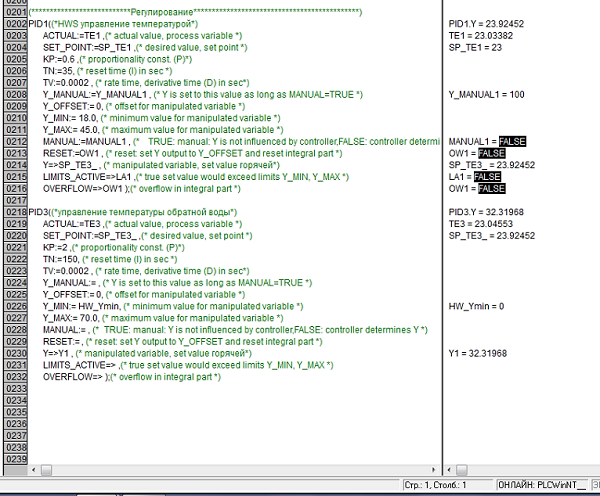 This is what it looked like in the end 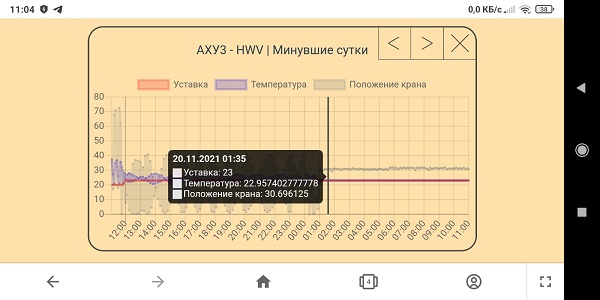 You can see how this WEBSCADA works by following the link.