Ramp processes are most often used where there are temperature control tasks. When the temperature of an oven or any other device cannot be quickly heated or cooled by technology. I used such functions in the work of greenhouse complexes, when drying and firing bricks, when hardening metal products, in fruit ripening systems. We do not control the variable of the object itself, but we work with the value of the regulator, which regulates the temperature of the object with the help of tens, gas or other control methods. 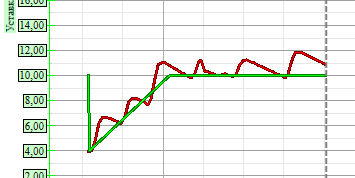 In this article I will share a method of programming the RAMP function for linearly incremented technological processes. When it is necessary to increase or decrease the set value from the initial value to the final value for a given time interval or at a given speed, for example 2C per hour. It is important to note here that for this function to work correctly, we need a variable associated with the controller's system time. The variable is constantly changing in the code of this block. The launch process itself is based on memorizing the start time and calculating the time until which the function will follow. This program code is taken from a program written for Codesys 2.3, but with minor modifications it will work in other systems where the ST (Structured Text) language is implemented in accordance with the standard. The block begins with an ad. Be sure to comment your code. This will reduce the security of your solution, but will increase clarity and readability.

Now a little about the code of this function block. The code is executed on the CASE statement, which is convenient for implementing a state machine. This is when at any given time some part of the program code is executed, and all the rest of the program code is in a waiting state. It is possible to make various flexible combinations like the SFC language. The transition from step to step is controlled using the integer variable State

IF NOT START THEN State: = 0; END_IF; (* Return, if the START button has stopped working, to step 0 *)
END_CASE;
END_FUNCTION_BLOCK