Discussing the capabilities of TeslaSCADA2 - 2.22 on the Big_ASU forum, a reasonable question arose, what is it and what is it eaten with. As an integrator who delivers a lot of different volumes both by himself and with partners, I am constantly in the process of searching for alternatives.

The search for alternatives to SCADA is mainly driven by external circumstances. The market is getting tougher, there are more customers, and their character is mostly nasty and tight-fisted. It would probably be more correct to compare TeslaSCADA2 with Iridium Mobile, since the products are mainly focused on smart homes, but I decided to compare it with the well-known Trace Mode. The advantage of this article will also be step-by-step instructions for setting up these products for communication via the Modbus TCP protocol + the generated files themselves may save someone time. Here's what came out of it:

Versions of products that I compare
Tesla version 2.22
TraceMode version 6.10.1

First I download the distribution kit from the official site http://teslascada.com/ru/downloads-ru/teslascada2  noting in passing the presence of video tutorials and a support forum. I will get to know them later, as we progress, and who reads the instructions until they reach a dead end?)

There is no regular antivirus on the computer under test, there is only a firewall, therefore, out of many years of habit, I check the downloaded distribution kit for viruses on an online resource. The result is inspiring, according to 67 databases, no viruses were detected, so I boldly run the installation - the TeslaSCADA_IDE.exe file in the archive folder. 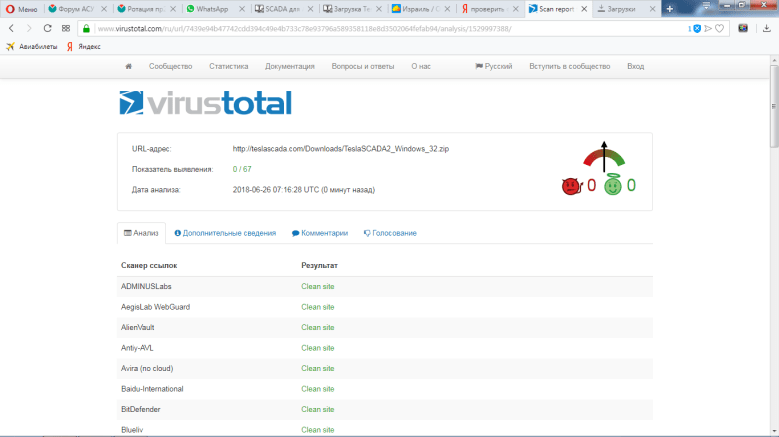 While installing, I skim through TeslaSCADA_IDE_UserManual from the same folder. Yeah, all the documents are in English. In general, of course, it is strange, the product is Russian, but oriented to the west. Okay, maybe at least the help in Russian will be, as in TraceMode (by the way, it is very detailed and well structured there).
So, that's it - the scada is installed, I set myself the task of interrogating a hypothetical slave device via Modbus, reading and writing a couple of registers. I don't deliberately read the documentation just yet to find out how intuitive the user interface is. Yeah, I immediately found the Russian language (although only information about the product is hidden under the help button ..), I press - File - Create project, I leave all the settings by default. 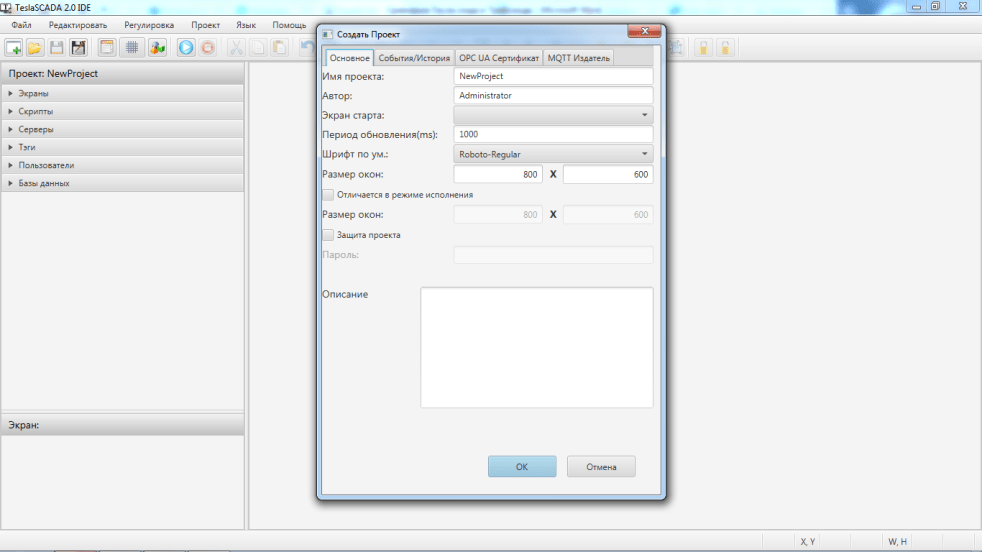 Where should we begin? Probably from the creation of the operator's screen, because the perception of the entire project depends on the graphic "gadgets". What is there? Flat and volumetric geometric shapes, text fields for input and output, buttons and switches, lamps and indicators, valves, conveyors, devices, etc. Well, the graphics please. Such functionality in Trace Mode is available only in the paid version of the product.
Moving through the menu, with the right mouse button, I placed a couple of objects on the screen and immediately created two Tags for them - for input and output of numbers in INT16 format. Due to the lack of real physical devices, for testing I use a software slave simulator - PeakHmiMBTCPSlave, which works via the local bus. For real Modbus TCP devices, you need to add a server to the project from the menu on the left. 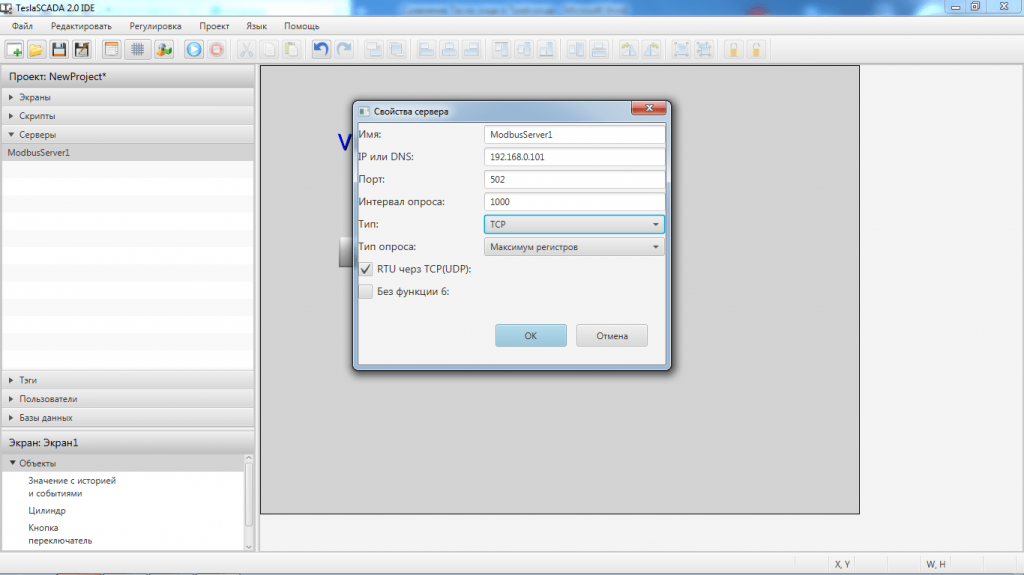 It's strange, but where is just Modbus RTU buried, via the RS485 interface? Okay, I'll look later in the description while I continue with what I have. So, tags, screen elements and the server are added, theoretically it remains only to make the correct bindings and you can run it for execution. Intuitively, I double-click on the text element with the left button and find the binding in the properties of the TAG. The text field will display the “measured value”, so I bind it to the read register. I bind the button accordingly to the record register. 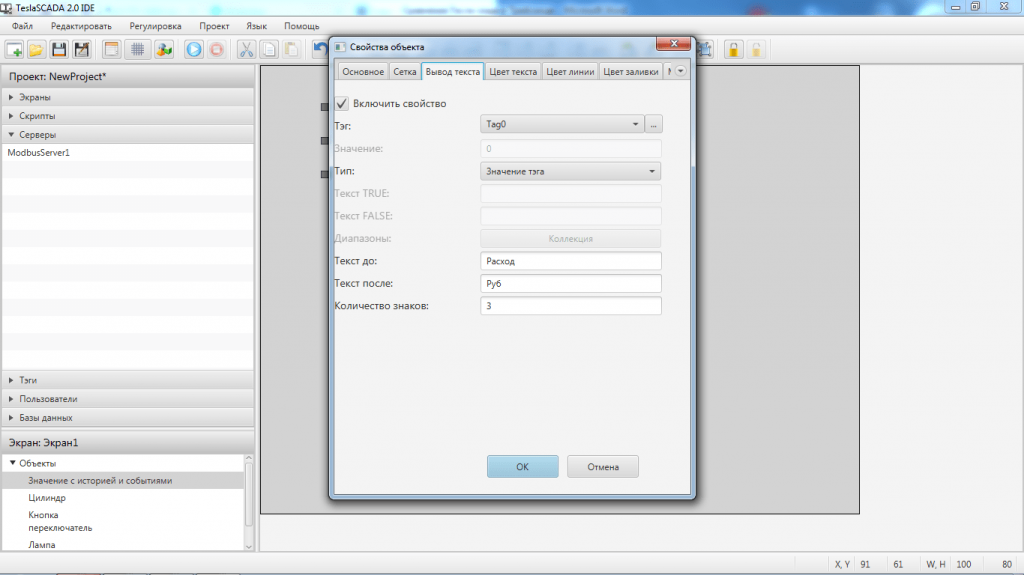 I save and launch the created project for execution, having previously launched the slave simulator. The first pancake turned out to be lumpy - the slave is silent and does not show any attempts to communicate with him. Well, half of the project still works, pressing the button on the screen causes the value of the output TEG to change, and entering the value into the receiving TEG is displayed in the text field. 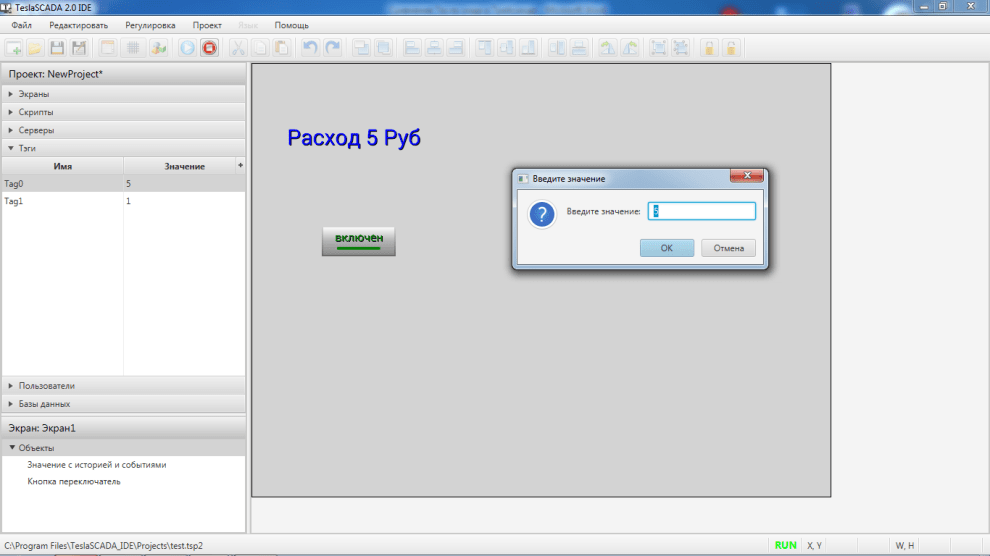 It means that there is a problem somewhere with the connection. 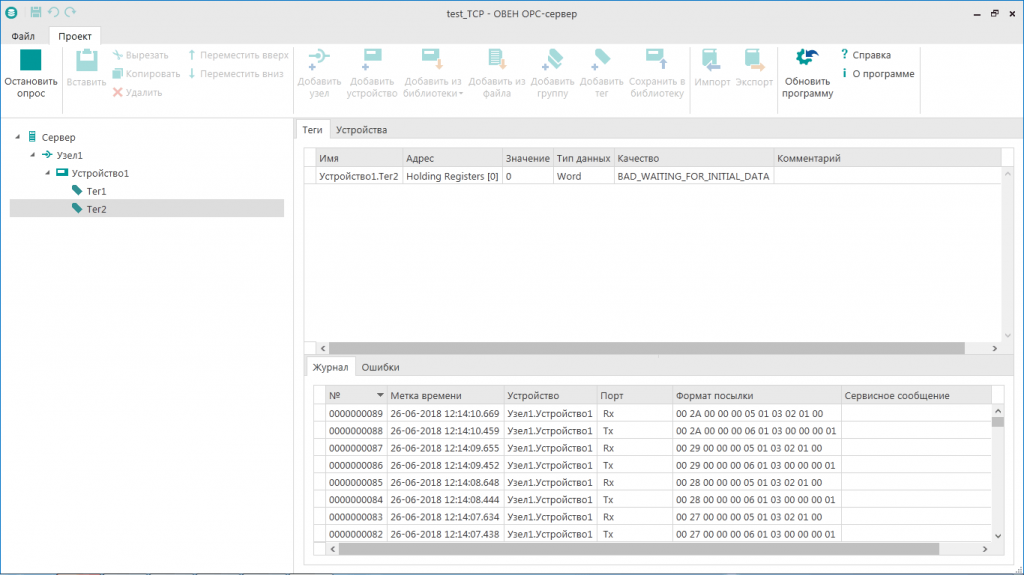 I will dig further, there is a vague doubt that I did not enter register addresses anywhere, because I did not find where it is done .. Aha, here they are, when a server is included in the Modbus project, the register address input field appears. But .. there is still no connection with the slave. I take the help of the hall - it's time to get acquainted with the training video on the site. So, the video, like the instruction, is also in English, apparently the authors see English-speaking countries as the main market for the distribution of the product, and they decided to save money on the voice acting of the video, although there are captions in Latin, more reminiscent of advertising slogans than explanations.
The very first video in three minutes repeated the fruits of my two-hour work (probably, I still had to start with the instructions) and revealed the reason for the lack of communication - the execution environment -TeslaSCADA_Runtime.exe was not launched, which also needs to be pre-installed and run. After that, in the menu - File of the main development environment, we find the item - Upload to device and if the network settings are correct, a detected device appears in the window that opens, on which you need to load the project. 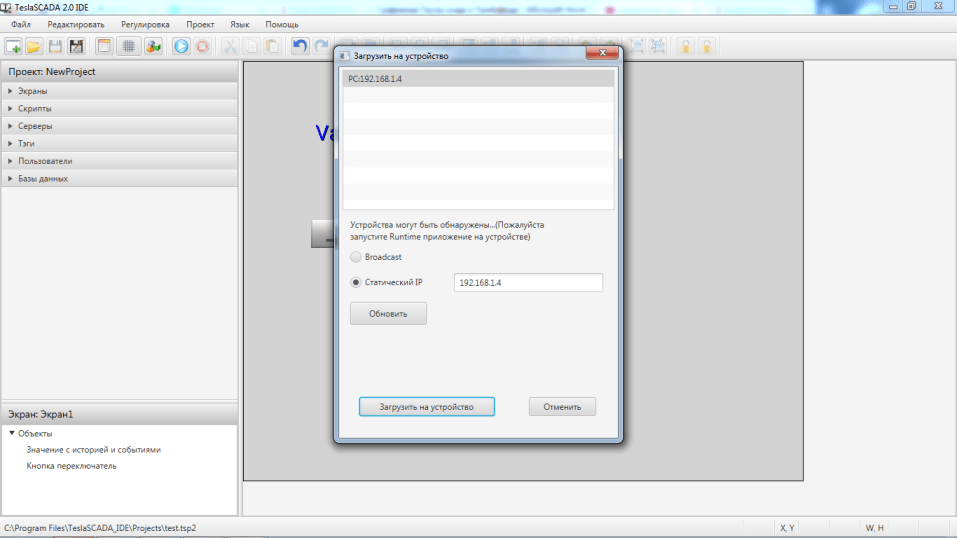 After the indicated actions, the slave began to stir and began to regularly show incoming requests, but for some reason a warning about disconnection from the runtime server popped up. 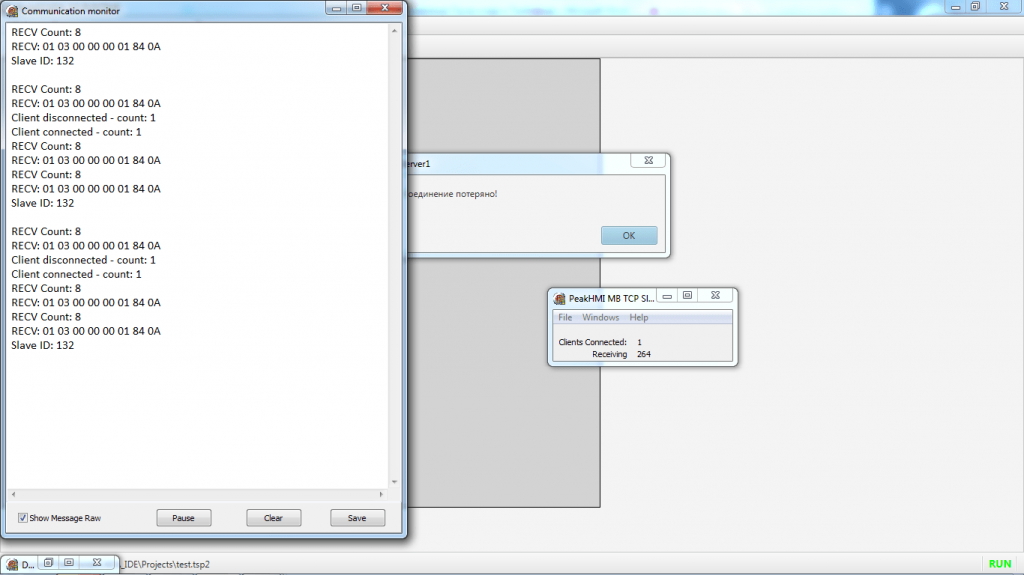 The joy was short-lived - the tags did not change.. After several minutes of searching by the method of scientific poking - the cant was found, the type of tags was incorrectly indicated - uint16, instead of int16, in any case, after the correction, the exchange went both ways - registers 40001 and 40002 on screenshot. 40001 is bound to a text box, 40002 is bound to a toggle button. Real addresses are lower by 1, the slave emulator gives such an offset.

In principle, the algorithm for creating a project is more or less simple, there are several videos on this topic on the source site - http://teslascada.com/ru/videotutorialsru
Because for me, the question remained open, where Modbus RTU is still hidden and whether it exists at all, I finally decided to delve into the manufacturer's website. The desired protocol was indeed not on the list of supported ones, which causes some bewilderment. 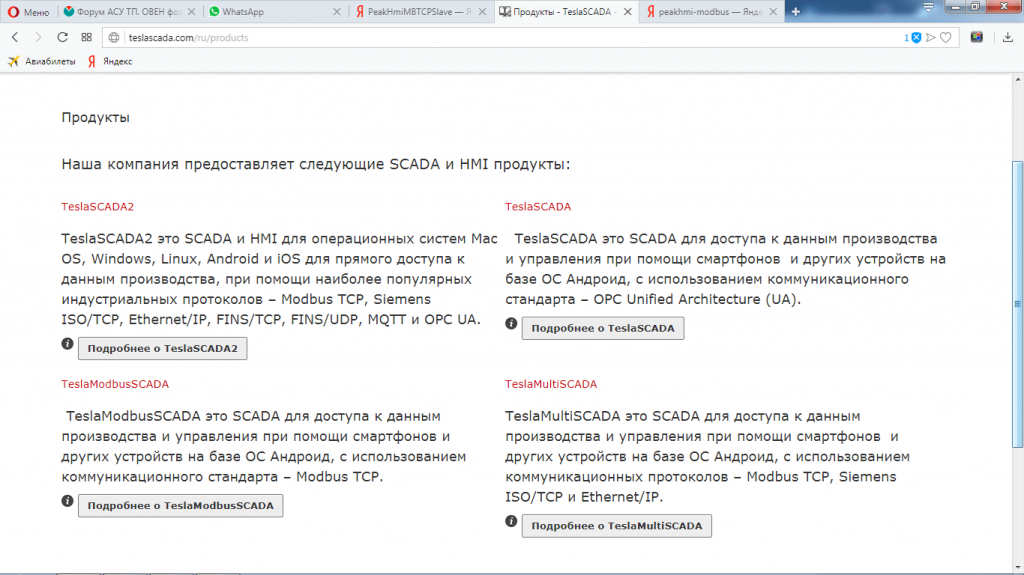 Despite this fact, TeslaScada2 is a fairly advanced Scada system that has a low entry threshold (for an experienced user) and has sufficient tools to create modern and convenient control and dispatch systems..

In contrast to Tesla Scada, let's set a similar task for the TRACE MODE product - polling the Modbus TCP slave through the operator's workplace. The distribution kit is available on the developers' website, though after registration -  http://www.adastra.ru/products/dev/scada/. In the free version, one hour of operation of the RTM is available - a real-time monitor, but without a limit on the number of TEGs, as in Tesla Scada. The installed product is also divided into development environment and runtime environment. So, the development environment is installed, let's start creating the project. In the Sources - Receivers layer, create a group - Modbus. 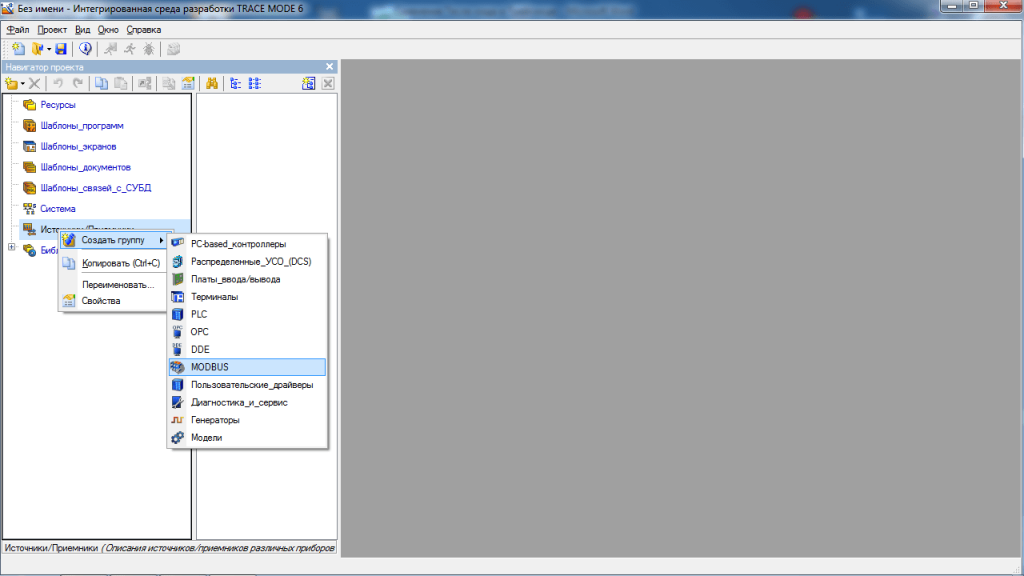 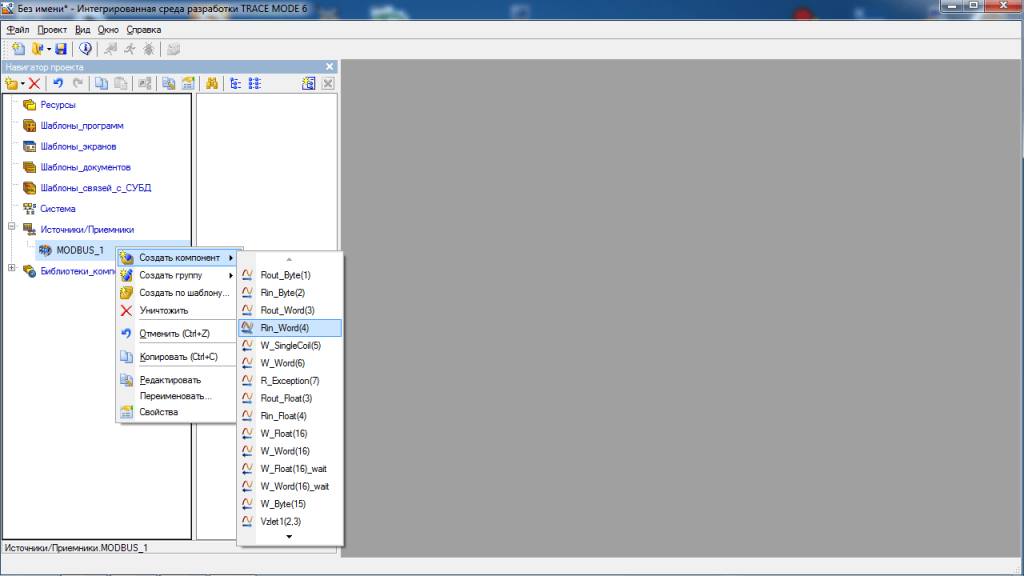 Then, in the created group, we create two components Rin_Word (4) and W_Word (6) - these will be registers for reading and writing to the slave, respectively 4 and 6 functions. Each resulting physical layer channel is editable. We leave the port number zero, this parameter is not used during a TCP connection, all you need to do is enter the slave ID in the address field and the offset for the channel. For an output channel, all the difference will be in the direction of transmission - the Output type. 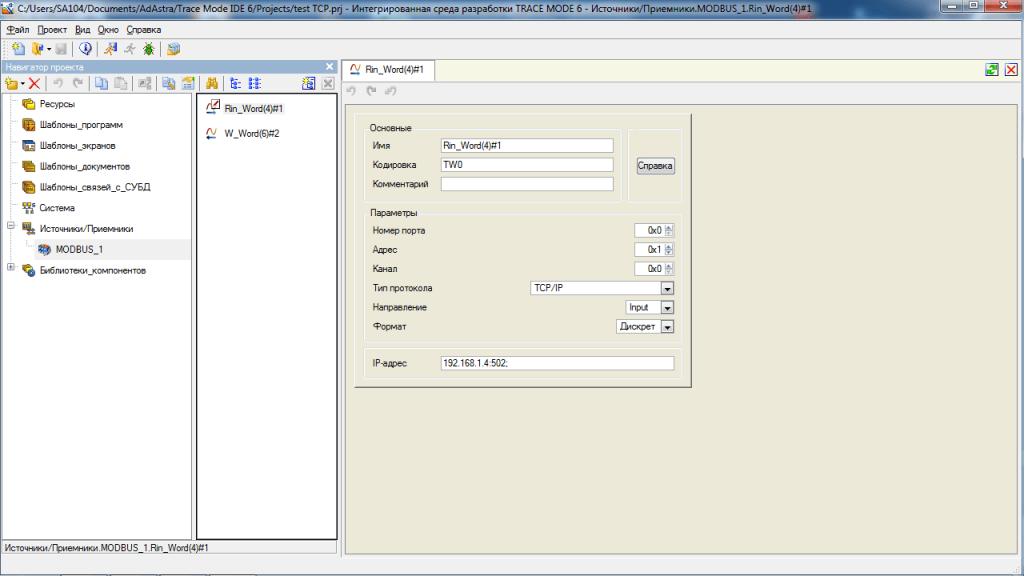 Next, you need to create an RTM node - aka RTM, in general, you don’t have to bother with the definition, the main thing is to create it, without it the project will not work. 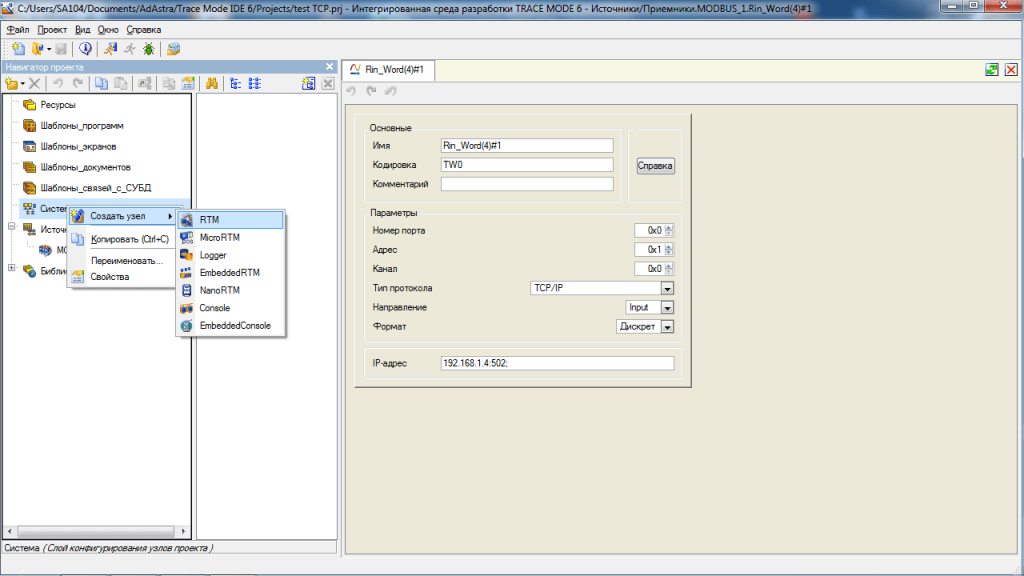 In the node that appears, the Screen component should be created, there may be several. 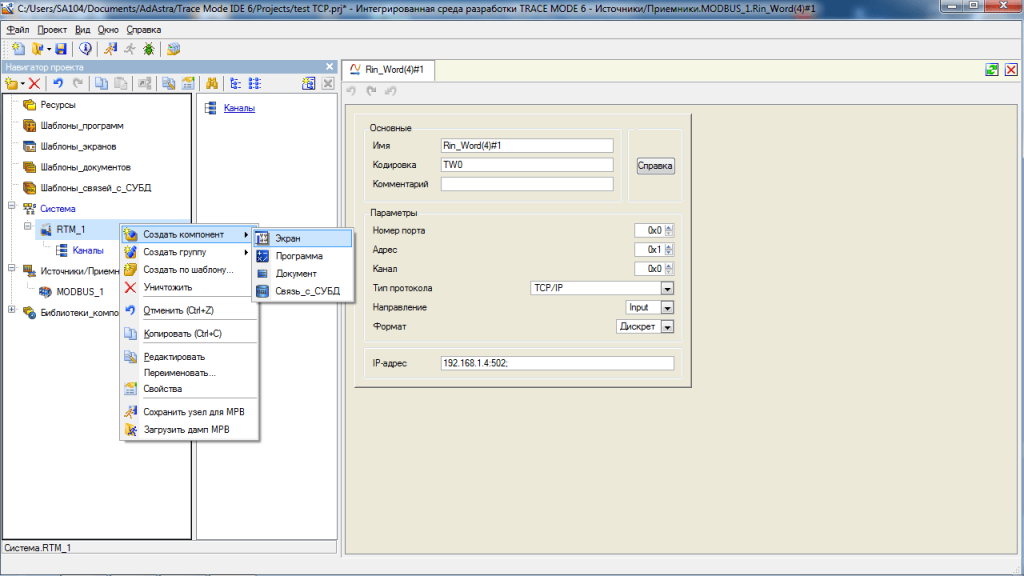 Further, you can appreciate the full power of Trace Mode, simply by dragging the channels with the mouse to the desired layers, while the necessary bindings are automatically created. It is very convenient when, for example, you need to bind one hundred identical discrete channels to one hundred lights on the screen. Most of the work will be done automatically. In fairness, it should be noted that it is still worth checking whether everything is correctly attached, relying on 100% that the system itself cannot arrange everything correctly. So, one by one we grab the Rin and ROut components from the source-receiver layer and drag them into the channels layer (System-RTM_1 - channels). Two channels of the HEX16 class will be automatically created, already assigned to the selected components. Further, the created channels are similarly dragged into the screen arguments layer, this layer works directly with graphic elements on the screen. In the process of these dragging, the names of both channels and other components are repeatedly changed. If specific names are critical, all renaming is best done after bindings are completed. 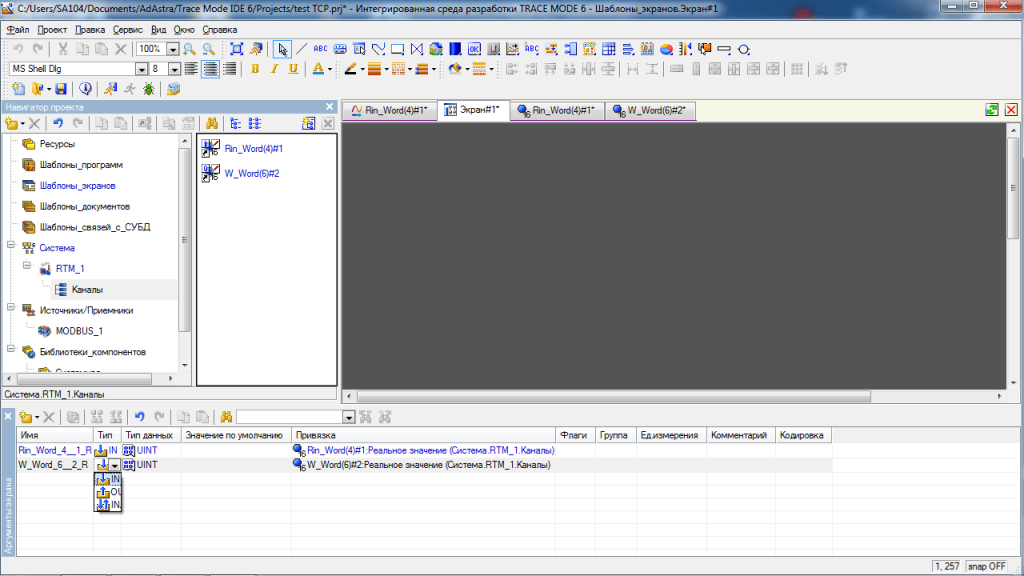 As noted earlier, some things need to be corrected. Namely, change the direction of W_Word to OUT. What caused these glitches with binding, it’s better not to bother, but if you get used to them and correct them in time, then such a mechanism saves a lot of time. Another required fix is shown in the screen below. 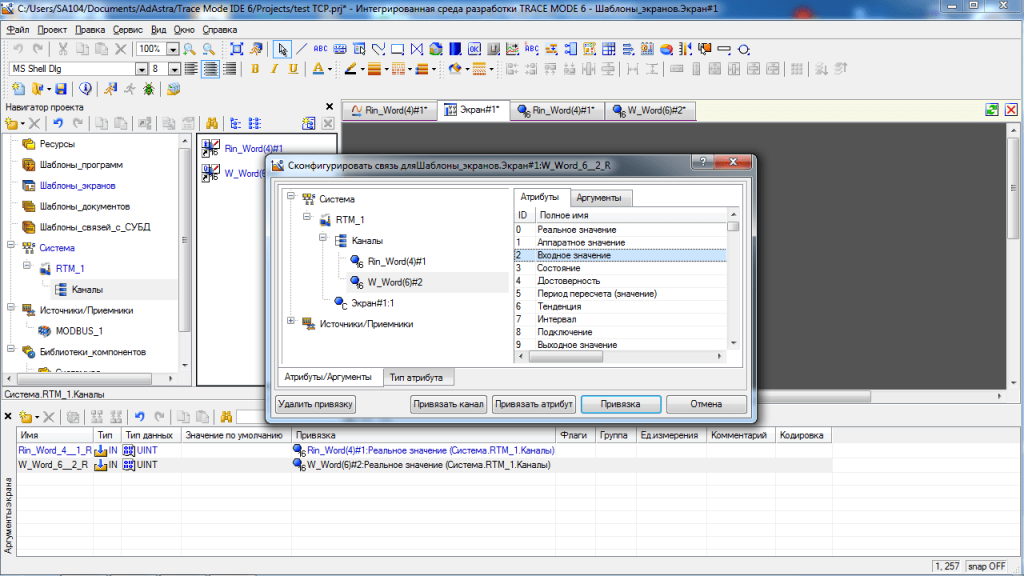 Now the simplest thing left is to place visualization elements on the screen and bind screen arguments to them (the last binding, honestly!) The elements will be the same as in Tesla Scada - a button and a text field. The selected screen arguments are dragged with the mouse over each visualization element. In the properties of the button, you only need to select the condition for switching. 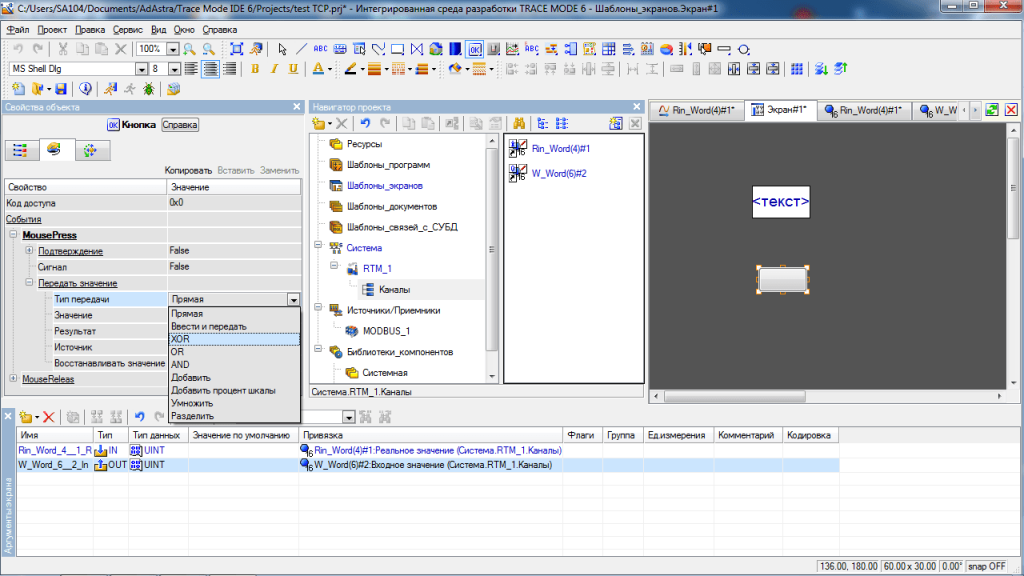 The red man at the top of the screen turns on emulation, which makes it possible to check how one or another element of the screen works without connecting to a real device. 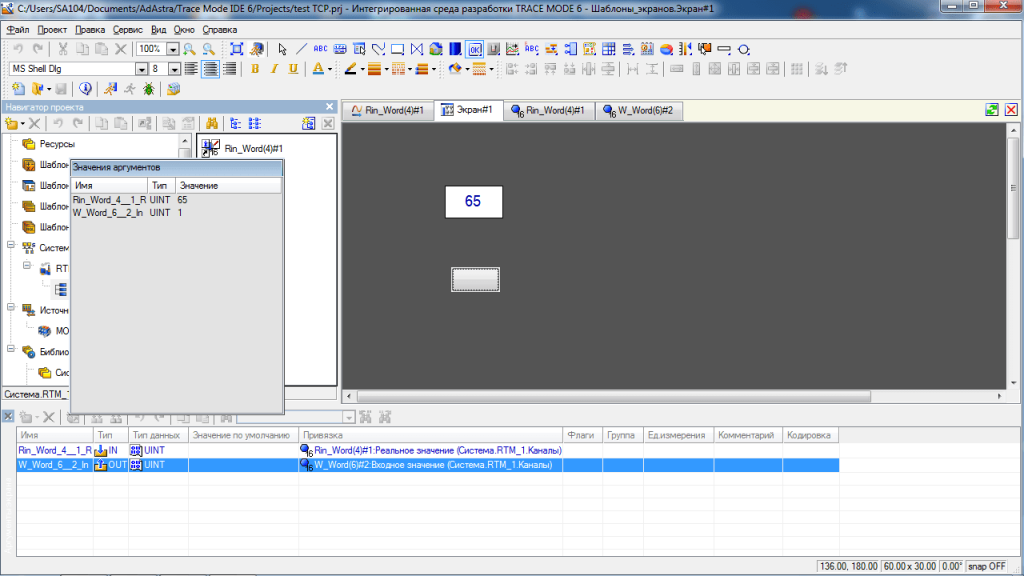 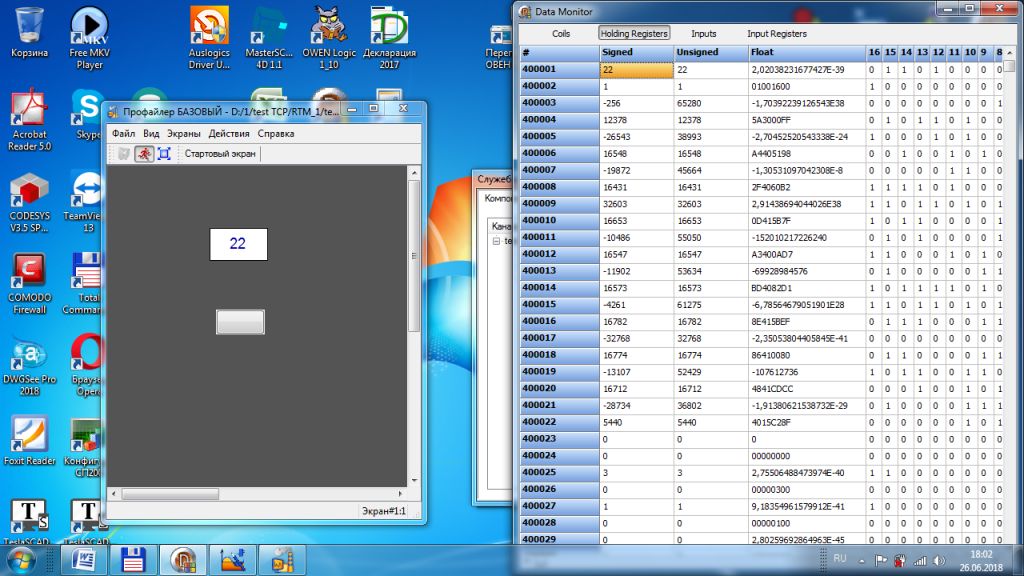 The result is the same as with Tesla Scada, but much faster, the description of the process undoubtedly took longer than the action itself - because there are more mouse movements in the right direction.

Final summary: Each of the SCADA systems noted in the report has its pros and cons, so any of them should be used based on the terms of reference for a particular project or feasibility study.

Still, in the future, if I have free time, I will try to compare it with the Iridium Mobile product. Understand what value for money products, download to iPad or Android smartphone. To be continued...

Below is a feedback form, authorization is not required, if you have a question, write and send