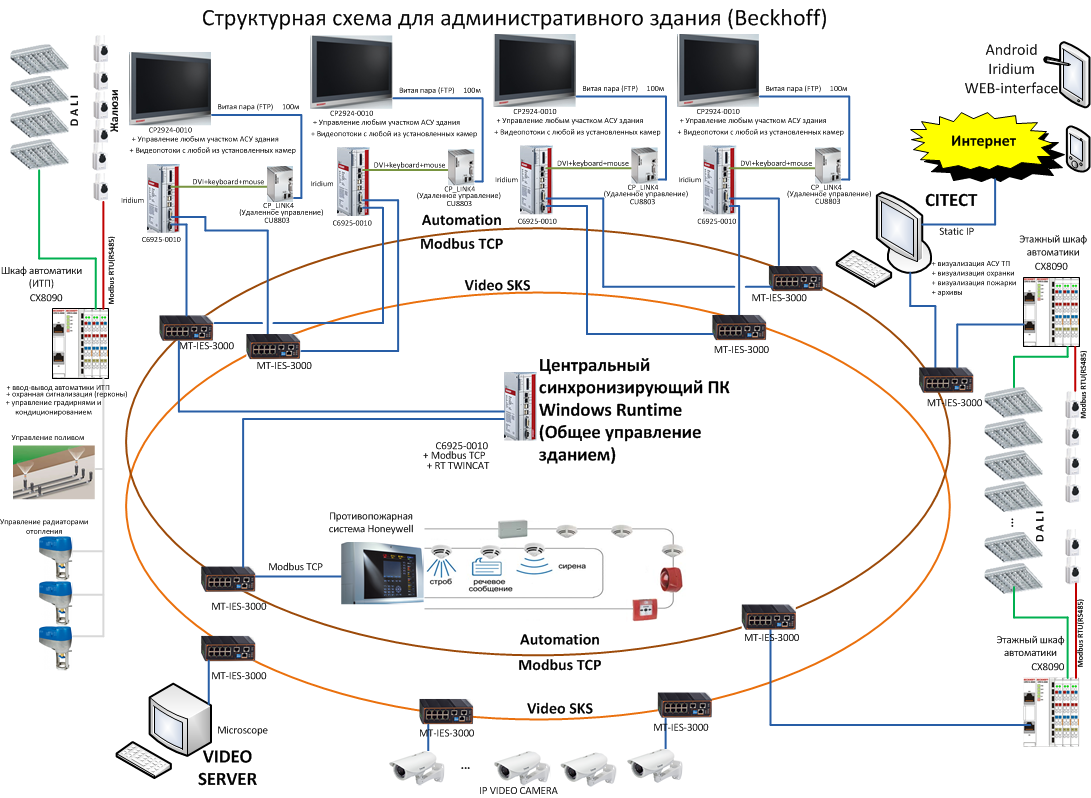 The distributed-centralized architecture of the administrative building is based on the principle of high network reliability, as well as an open protocol based on Ethernet - Modbus TCP. With this distribution, a compromise is reached between the reliability of the system components and the scope of functions that are embedded in them..
The integration of all existing systems into one based on the main Modbus TCP protocol allows you to display the system status indication on the room visualization panels and control it from anywhere in the building. The building automation system with this architecture is scalable both in the composition of signals and in the composition of protocols and subsystems. Easy to expand the system with new components.
To organize a highly reliable ring network, a network communicator from Modultech MT-IES-3000 was chosen, which ensures the operability of a ring network topology. The building is supposed to use two Ethernet rings to automate and ensure the passage of video streams from IP-surveillance cameras. A video server from Microscope will be used to archive information from video cameras.
The main component of the building system is the "Central PC". This industrial computer has a pre-installed Windows CE operating system using the RT TWINCAT runtime component and provides synchronization functions between controllers, ensures connectivity when controlled from the Citect SCADA system, as well as equipment control through room visualization panels. The main feature of the central controller is the energy saving function of the building as a whole. So, if the halls of the building are illuminated by the sun, the blinds will open automatically. The water supply temperature in the central heating unit will be regulated in accordance with the needs of the ventilation system, the temperature of the radiators will be regulated by analog regulators. Electricity consumption will also be optimized by supplying different control signals to frequency drives of euro motors.
The room visualization panel СР29 Beckhoff provides the functions of video surveillance, control of equipment modes, lighting scenarios in the building, parameters of space heating. It is planned to install the Iridium platform on the computers of the panel to provide automation functions.
An autonomous Honeywell station with the ability to be connected to a common dispatching system was chosen for the fire alarm.
The Beckhoff CX8090 PLC with K-BUS was chosen as the controller of the individual heating point (ITP) and other places. Controllers of this type will be placed on different sections and floors of the building to ensure the collection, management and transmission of information from various automation objects. From these controllers, various lighting scenarios will be launched (DALI protocol), alarm signals will be collected, control of three-level radiator valves, blinds drives.
A Citect supervisory computer will be installed for centralized control and indication. In addition to the control functions, Citect will carry out the functions of collecting archival information, displaying graphs, and transferring control functions via the Internet. An Iridium-based application will be created on external PDA devices (Ipad, etc. based on Android), making it possible to control building systems via the Internet.
On mobile devices (iPAD or PDA based on Android), an application will be created for remote control of building systems. Application software is supposed to be made on the basis of the Iridium mobile visualization system


If you didn't find what you were looking for, please let us know in the comments.
Back to the list